Communities surrounding the power plants are the valuable stakeholders for operations of BPP because they have received both positive and negative impacts throughout the project’s life cycle. Consequently, the community’s acceptance is a significant factor for the project’s sustainability.

BPP has placed great emphasis on building community engagements and listening to their opinions since the project’s feasibility study gets started in order to collect comments and concerns from the communities, using them for engineering designs and reducing any impacts likely arising, inclusion of determining the monitoring and preventive measures during the project’s construction and operational stages.  In addition, BPP has used opinions received from the community engagement to improve its operations and support the sustainable development corresponding to the local needs.

BPP has determined to conduct a social baseline study in the areas during the project’s feasibility study stage by adhering to the international standards in order to understand economic and social conditions in the project’s area.   It has also established the guidelines for building community engagements and applying them as appropriated. 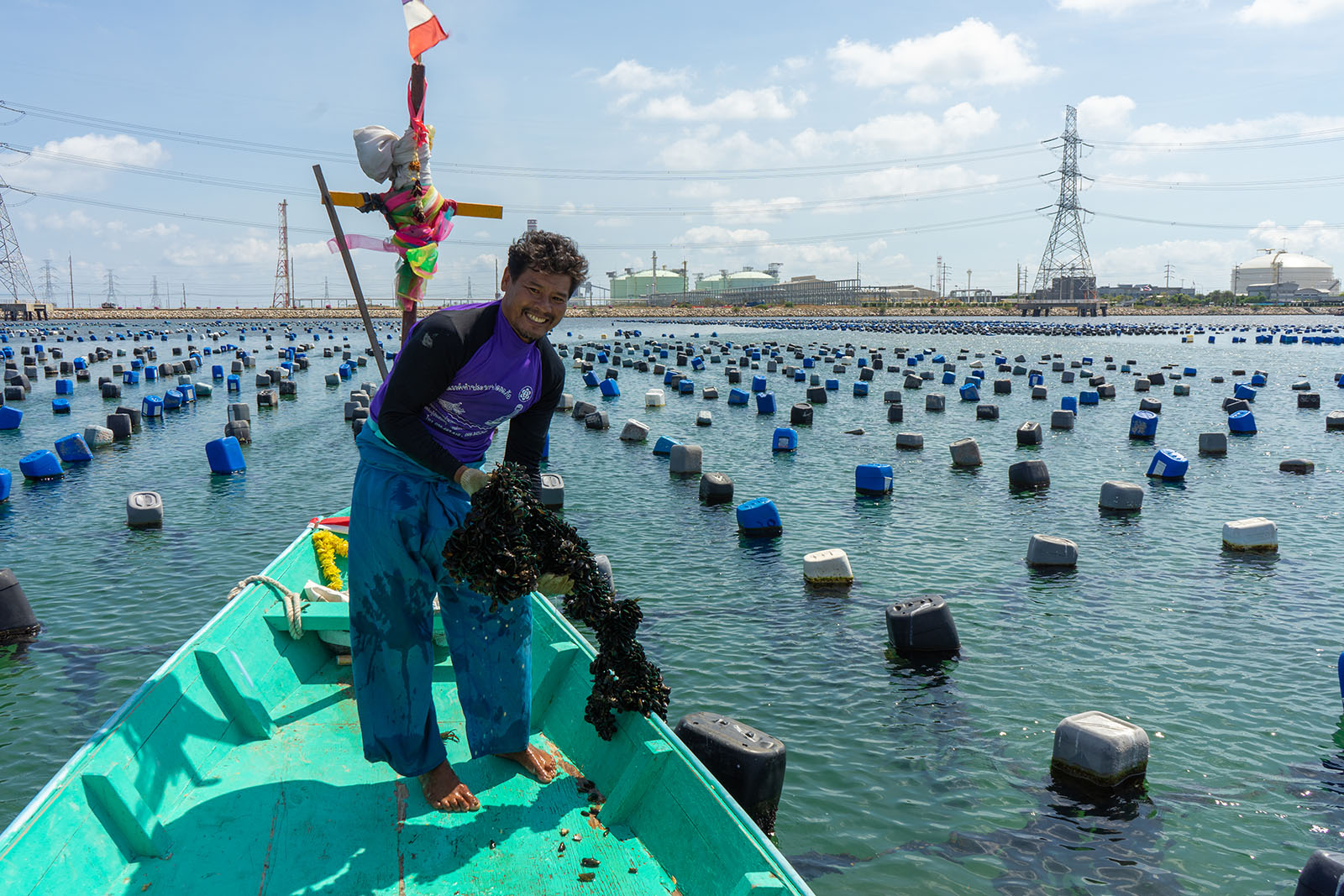 BPP has engaged the communities through stakeholder analytic procedures, dividing into directly and indirectly affected groups as well as beneficiaries since beginning to conduct a feasibility study in order to listen to opinions and concerns from the communities. These opinions and concerns are used for designing the projects and developing proper measures to mitigate social and environmental impacts for each area.  Generally, the project’s stakeholders are classified based on the impact levels. The distinguishment may differ from local conditions and laws of each country.

BPP has assigned a direct responsible function to engage communities in order to develop the operational plan appropriate for each community, covering a vulnerable group such as persons unable to protect their rights or have no freedom to make decisions on effects they may receive, such as children, the elderly, refugees, and native people.

The CHP plants in China, namely Luannan Power Plant, Zhengding Power Plant and Zouping Power Plant are located in the industrial and city areas for generating power, steam, and cold water to factories and local communities. BPP, therefore, has collaborated with customers, business partners, government agencies and nearby companies to engage communities through various activities for each location.  As communities are also one of the key customers buying heats from the power plants during winter, the power plants have to operate in accordance with the community’s expectations.  These include the stable operations, continuous quality heat supply, and flexibility to community’s needs. 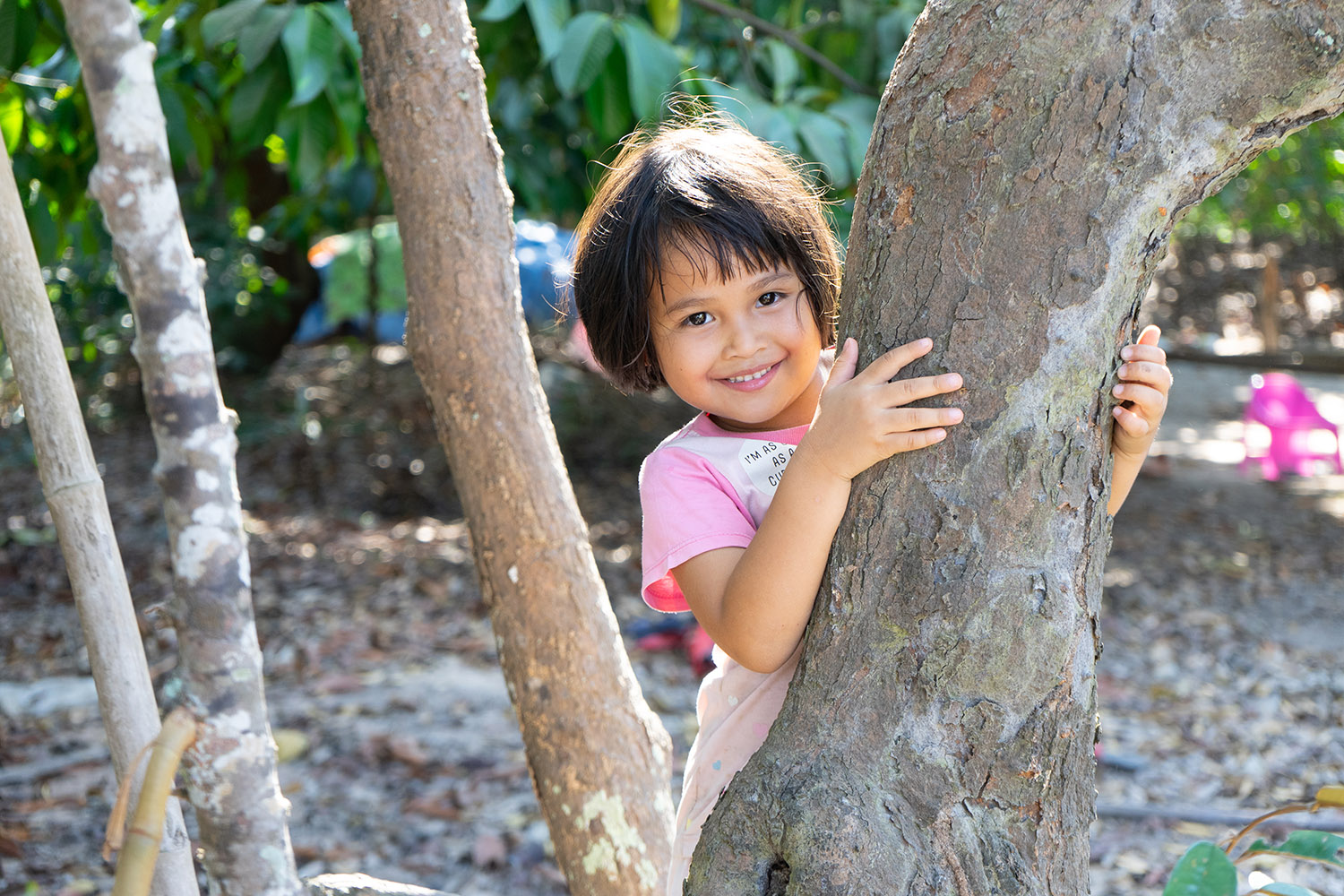 The Vinh Chau Wind Power Plant project is considered as Banpu Power’s first step in conducting the power business in Vietnam that the surrounded community is an important stakeholder for its operation. The community living surrounding the project have been affected both positively and negatively throughout the project period.

The Company, therefore, places great attention to social data studies in the project areas. Moreover, a community engagement process and a community’s opinion hearing have been carried out prior to project construction. These include data gathering from the community engagement. All data collected is brought up and lead to the project design and decision making. Furthermore, all dimensions of possible impacts is monitored during both the project construction and operation.

In 2019, the Company conducted a study on social data with key activities such as:

The Company is able to use data from the locally social studies to create community engagement and look for opportunities to be a part in promoting the sustainable development in the future. 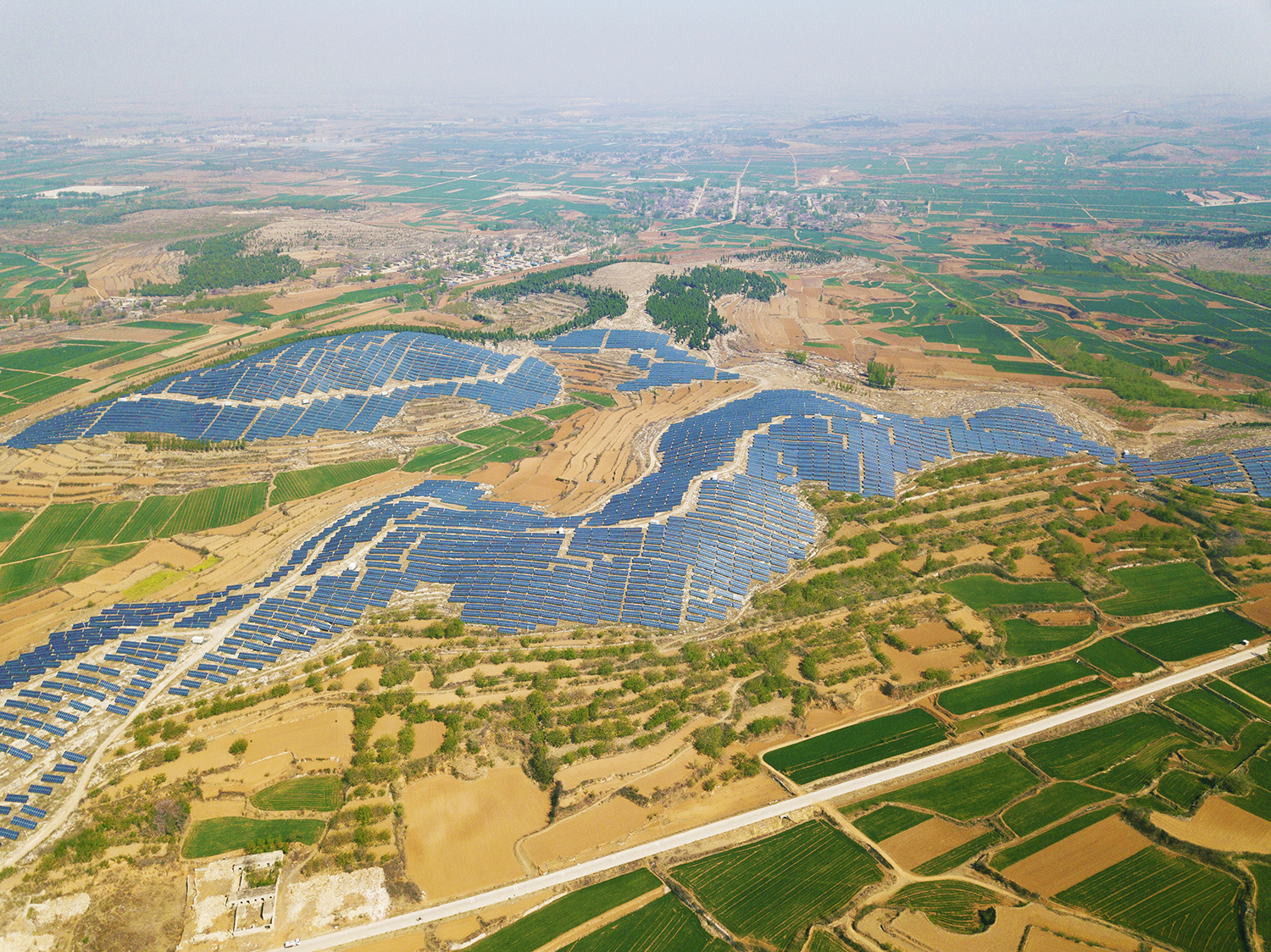 Haoyuan Solar Power Plant is located next to Ma Ziyu Village, Taian City, Shandong Province, China. This village is a rural village that faced with severe droughts during the winter season and has limited infrastructures, i.e. electricity and illuminations and water supply.The majority of Ma Ziyu population works in the agriculture field and most of the population is an elderly. 60% of them are 60-90 years old while 30% are 50-60 years old.

The Haoyuan Power Plant has implemented community engagement activities through surveying the needs of Ma Ziyu community members. The survey found that they need to improve the quality of life such as basic infrastructures, skills development and employment so as to increase their household incomes.

The community engagement and social responsibility activities are as follows: 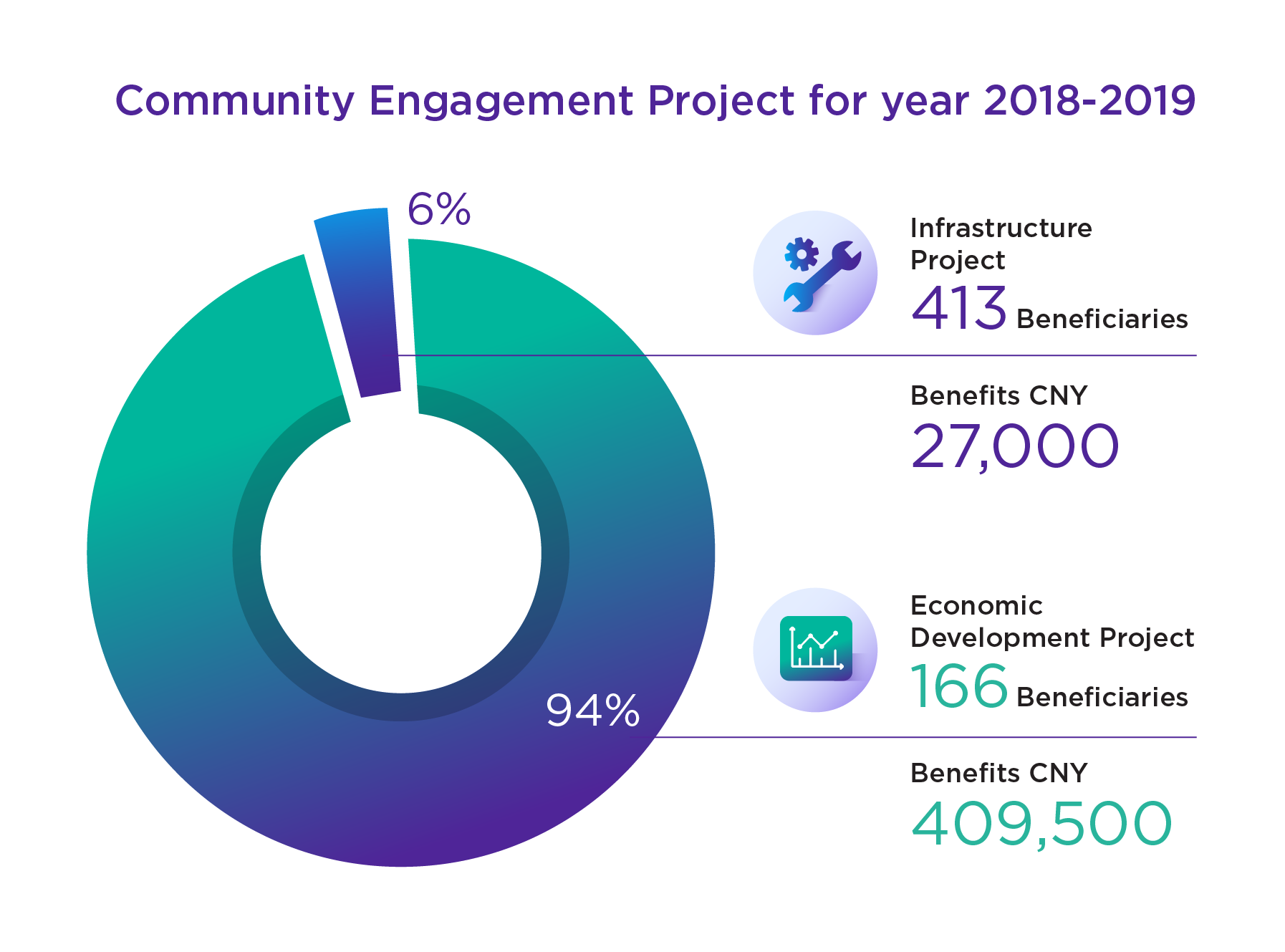 The Company has placed great importance on respecting human rights and indigenous people engagement, although there is none of indigenous people staying in most of the company operation. The Company has to study and gain better understanding at the feasibility study stage so that the project can operate smoothly and will not affect ways of life and cultures of these native people. The Company has also put emphasis on cultural conservation, fair quality of life promotion such as public health and education, promotion of native products, and providing more job opportunities compared to people from other regions.

Located in Shaijiazhuang City, Zhengding County, Hebei Province, People’s Republic of China, Zhengding CHP Plant has a total installed capacity of 73 MW, generating about 10 million gigajoules of heat per year for users in Zhengding County, consisting of the industrial sector and communities in Zhengding City.   It is the only power plant supplying heat into a centralized heating system, which is essential to people during the cold winter months.  Recognizing its responsibility on the well-being of local communities, Zhengding CHP Plant has carried out the production process improvement projects in parallel with responding to the community needs, for example:

Such operations have yielded fruitful contributions to a community of approximately 58,000 residents who continuously use heat with high quality and cost-effectiveness during the winter.  This has caused people in the area to switch to a centralized heating system from the traditional heating method.  As a result, the number of customers of Zhengding CHP Plant has continued to increase.  In 2021, the community heat sales volume exceeded the target by 35.2%, with community heat sales revenue of CNY 27.3 million.  Meanwhile connection fee income was recorded at CNY 12.2 million and CNY 24.3 million of a governmental subsidy (tariff). 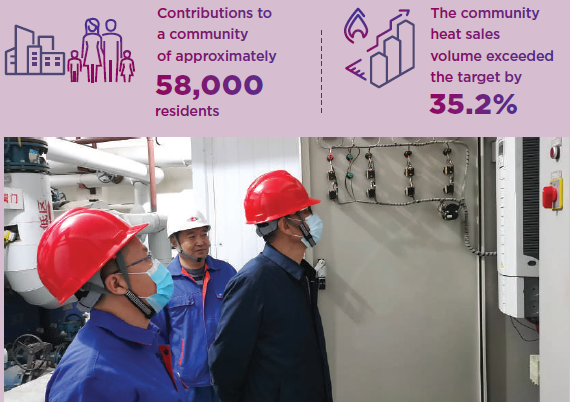 5. Improving the quality of life and the community economy surrounding the solar power plants in China

The solar power plants in China have continually implemented the projects for improving the quality of life and improving the economy according to the needs of each locality, especially that in rural areas where quality of life is still required for better improvement. The goal of this project is to upgrade the quality of life and promote occupation creation in the communities, including building an understanding between the power plant and the communities.  A number of professional skills development projects have been undertaken in order to generate income from co-working with the power plants, such as cleaning solar panels to increase power generation efficiency, weeding and cleanliness to prevent fire, cable routing, construction and cleaning, etc.

In addition, safety and environmental training has been provided in tandem with supporting safe operation in the workplace. The participants of this project are residents from surrounding communities, most of whom are working in the agriculture field.  The project has resulted in an additional earning in a total of CNY 1,286,600 for local people. Moreover, it has created engagement and good relationships with the community as well as yielded benefits to the company in maintaining the power plant to be able to generate electricity with the highest efficiency. 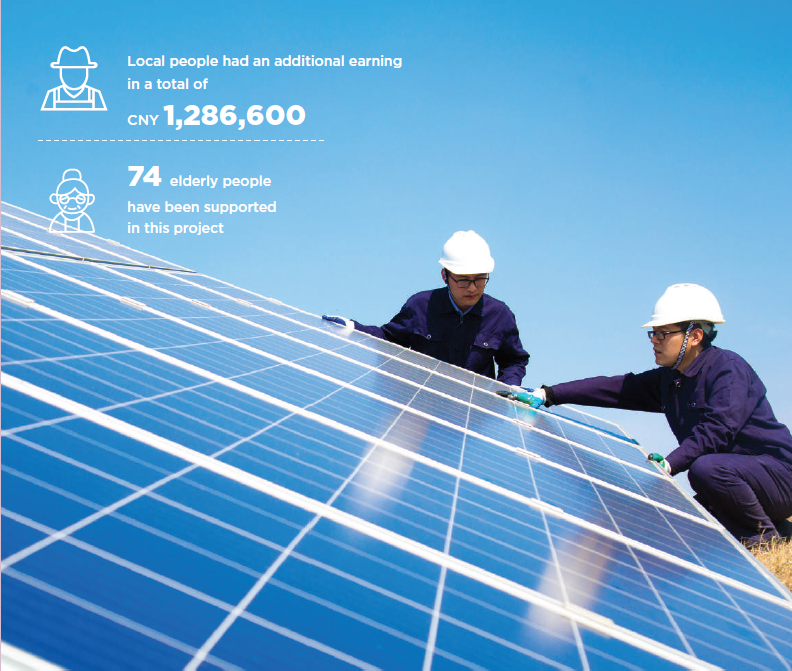 Throughout the past year, the company’s solar power plants in China have been able to generate power continuously without any interruption. In addition, the surrounding communities have also helped monitor security around the projects in another way.  Besides, other quality of life improvement projects have been also implemented, such as: