The major costs of thermal power plants and combined heat and power (CHP) plants are from fuels which are used for generating power, steam and other energies. The energy consumption efficiency, therefore, directly affects costs and competitive advantages as well as greenhouse gas emissions. Meanwhile, regulations setting the fuel consumption intensity per unit of product standards by the local government, such as those in China, are considered as the challenges the power producers must adapt themselves to keep up with such changes. This includes the improvement of energy consumption of existing power plants and projects under development in response to clean energy demand in the future and the power plants’ lower energy consumption intensity per unit of product as well as be a part of alleviating climate change.

Activities related to energy consumption in producing electricity, steam and heat are as follows:

As a producer of power, steam, hot water and others, the Company’s energy consumption is mainly from the boiler’s fuel combustion activities of thermal power plants. The electricity production from solar power plants consumes minimal energy. The Company, therefore, focuses on power management in its power plants as follows:

The Company has managed energy by regularly monitoring and comparing the imported energy to the energy generated and consumed in each production unit since it is the main costs of electricity generation from thermal power plants and CHP plants. It is also looking for opportunities to reduce the use of fossil fuels which are the costs and causing greenhouse gas emissions such as: 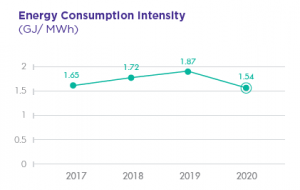 Moreover, Zouping Power Plant also installed the rotational speed control equipment of the forced draft fan at the boiler No.4 and No.6 as well as the induced draft fan at the boiler No.6 in order to reduce the rotational speed. Meanwhile, the power plant has been operated at the low operation mode, which can help reduce energy consumption approximately 50% or 9,290,000 KWh per annum, equivalent to CNY 4,200,000 per annum.